The Original Outfits - The Underthings

My first two Victorian gowns were made to attend the Llandrindod Wells Victorian Festival. I only had about three weeks to finish everything so I could only manage one day dress and one ball gown and the necessary underthings.

As I have always loved the silhouette of cage crinoline skirts, I decided on the late 1850s as my time period and started my project by stitching open drawers and a camisole (which I now realise should be a chemise!) from a McCall's costume pattern (3609).


It was a pattern that I already owned, having bought it some years previously in a fabric store and it made up very easily. However, I would probably not use it again as I am not entirely convinced by the historical authenticity of the camisole top, even if it does allow one to show off one's drawers! In fact, I expect I bought it because the model on the left looks like the girls in Seven Brides for Seven Brothers when they sing and dance in their underwear. Nevertheless, so far none of my research has found any examples of camisoles replacing the longer chemise under corsets so I suspect that it may be a Hollywood interpretation!

﻿Still, I was quite pleased with the finished results and they provided a perfectly acceptable first layer for my costumes.

Unfortunately, for the next layer I had to cheat a little bit. I had never made a corset before and given the limited time available wasn't sure about attempting one. However, I knew that I would never be able to carry the weight of the cage and skirts without a corset so I had to make do with the closest thing I could find to a Victorian corset. And while it may not be exactly period-correct I have to admit that I do love my What Katie Did corset.

The next step then was the all important one: the cage crinoline. I chose Truly Victorian's cage crinoline and was amazed at how easy it was to put together. Admittedly, I did need my brother to help me cut the steel boning and to slide all of the bones into the casings but following the instructions carefully it was simple to join everything together and I didn't have to do hardly any adjusting to get the hoops straight.


For the underthings then that only left the petticoats which I made up from Truly Victorian's Free Hoop Petticoat Diagram (sorry - no picture) and I was ready for the next step - the gowns. 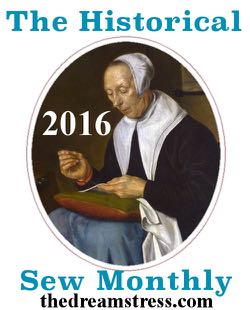